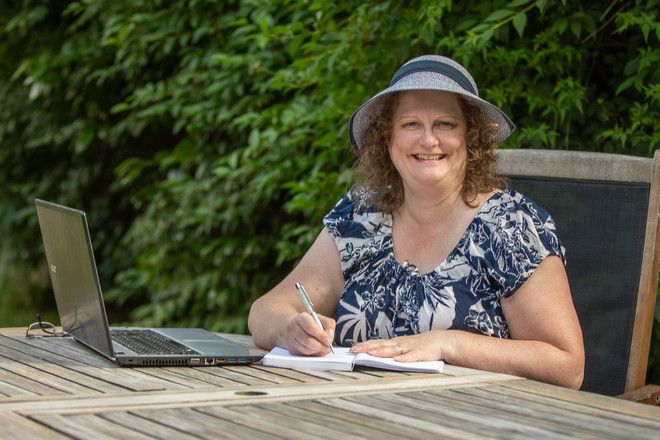 I can sometimes be found at the top of an abseil tower with Bear Grylls!

After 2 years at business college, I went into the family business of photo processing in the pre-digital age. During that time I learnt about quality control, credit control, health and safety, marketing, management of staff, photography from a different perspective, and running a business.

I became a partner of the business before starting my own family with two beautiful children. The business was sold as digital photography was in its infancy.  I was diagnosed with a primary lympoedma of the leg when I was 24, which is an incurable illness and a disability, but I am determined not to let that stop me doing what I want to do.

With a young family, I still wanted to bring in an income. I ran a very successful Avon territory, with a team of Sales Leaders. During this time I also studied colour therapy, which still enhances the work I do today. My daughter’s Brownie pack persuaded me to become a leader, which I still love to do now as a volunteer. I also became a governor at my children’s school. Using these new found skills, I became a school Governing Body Clerk, working at several schools in the primary sector.

In 2007 the World Scout Jamboree was held in Chelmsford. I took my children as day visitors and had an amazing time. This wet my appetite to go to a full one, and a year later I stepped nervously onto the photography team at my first jamboree at Essex International Jamboree in 2008. It was the most fantastic week, and afterwards I did more volunteer photography work with Essex Scouts.

2012 was a fantastic year for this country. Not only was it the Queens Jubilee, but we also had the Olympics. I was delighted to be a Games Maker driving the Olympic cars at Excel. I was also honoured, and privileged, to carry the Paralympic flame at 1.30am in Watford as part of the relay. Sandwiched in amongst these events was Essex International Jamboree 2012. I went back to the photo team, and made lots of new friends. At the end of the event they said I should be a photographer full time, so in October that year I started Lightning Event Photography, specialising in sport and events with onsite printing.

After a couple of years I also wanted to expand into weddings and portraits, but felt that the Lightning brand wasn’t personal enough. In January 2014, Tina Wing Photography was born, later developing into business and food photography. It was a hard battle having 2 different careers, but I am now a full time professional photographer.

It took some time to establish a foothold in these markets, but I persevered, garnering awards on the way, with multiple awards with the Guild of Photographers, being a 4 times finalist at the Essex Wedding Awards, and twice shortlisted for the Pink Lady Food Photographer of the Year.

I was delighted to be only the second person to qualify for the Guild of Professional Photographers Business Qualification, and I'm now allowed to use the letters GPPBQ after my name.

My values are honesty, truth, loyalty, passion,empathy and empowerment.

My mission is to create stunning, vibrant photography that tells the story of your life and business.

So today I have the business that I love, delivering stunning photography to families, businesses and restaurants.

And as a bonus, with my voluntary photography work with the Scouts, I also get to photograph Bear Grylls!